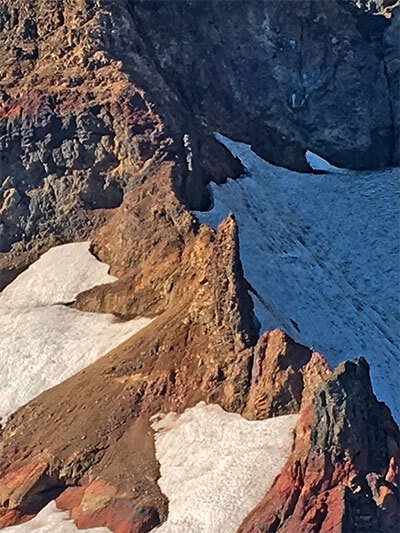 On September 25, 2016 at 11:00 am, 9-1-1 Dispatch received a phone call from Douglas Amend. Amend reported he had been hiking/climbing around the northeast side of Broken Top, had fallen/slid a significant distance and had injured himself. Amend had been hiking with two other friends earlier but had chosen to continue by himself, attempting to get to a higher elevation. Amend believed the area in which he had slid to was not accessible by his friends and told them to go back to the Broken Top trailhead and he would contact them later.

Amend requested rescuers respond with ATV’s to help transport him back to the trailhead, but due to the wilderness area he was in, ATV’s could not make it anywhere near his location. Also, mechanized equipment (ATV, Snowmobile, Helicopter) are only allowed to be used in the wilderness when there is a danger to life, limb or eyesight, which was not the case with Amend’s reported injuries. Amend had knowledge of the area, having hiked there previously and reported he would begin walking out on his own. Amend communicated his plan with a DCSO SAR Deputy and agreed to stay in contact with updates on his progress and condition.

At 3:20pm, Amend texted the DCSO SAR Deputy, reporting he was now lost and his cell phone had 1% of battery life remaining. All other attempts to communicate with Amend were unsuccessful. Fourteen DCSAR Volunteers and two DCSO SAR Deputies were deployed to search for Amend. Prior to reporting his lost status, Amend had previously texted he was making good time and should be back to the Broken Top trailhead within 90 minutes. With this clearly not being the case, it was determined it was possible Amend’s injuries were more significant than what they were reported. AirLink was contacted and assisted with an aerial search for Amend.

At 7:19pm, 9-1-1 Dispatch received another call from Amend, stating he was now at the Park Meadow trailhead and needed a ride. Amend had attempted to send additional text messages after reporting he was lost, but they had not gone through. A nearby DCSO Deputy responded and made contact with Amend, who was ultimately transported to his residence in Bend. Amend sought medical assistance on his own at a later time.

The Deschutes County Sheriff’s Office would like to remind those that recreate outdoors to prepare accordingly for your activity. Some considerations include proper clothing for day and night conditions in your environment, even if you do not expect to be out overnight. Ensure you have adequate water and food, topographical trail maps, extra batteries or charging options for phones or GPS units. Bring a light source and a signaling device. Seek out information regarding the area and what may be encountered, such as current and projected weather conditions as well as terrain in the area. Tell someone where you are going, what you will be taking with you and when you plan to return.

The Deschutes County Sheriff’s Office strongly encourages those recreating in the outdoors to do so with a partner(s) and not separate.