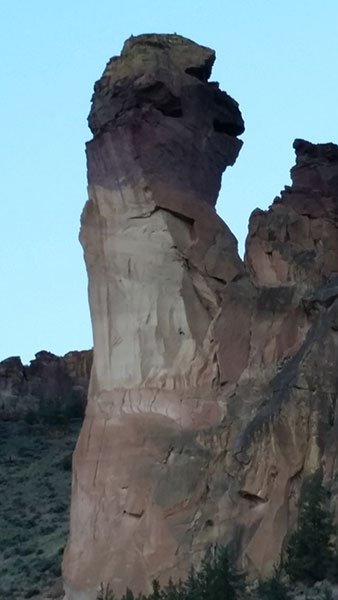 On 06/22/16, at about 4:57pm, Cordero Chavez reported to 9-1-1 Dispatch he and his climbing partner, Tyler Coleman, had climbed to the summit of the popular rock formation at Smith Rock State Park named “Monkey Face”, but were now in need of assistance.

Chavez and Coleman had chosen the wrong route to descend, leaving not enough rope to get to the bottom. Chavez was still near the summit of Monkey Face, but Coleman was nearly halfway down the approximate 450′ rock face, unable to ascend or descend further. Both subjects reported themselves as uninjured but needing assistance in safely completing their descent.

Eleven Deschutes County Sheriff’s Office Search and Rescue Unit Volunteers had been training at Smith Rock State Park and were just finishing with their training when the call came in. They were joined by five additional DCSOSAR Volunteers and three DCSO Deputies to begin the rescue mission. Redmond Fire Department also responded and assisted in ferrying personnel across the Crooked River on the northwest side of the park, closest to Monkey Face.

Four DCSOSAR volunteers climbed to the summit of Monkey Face and were assisted by additional volunteers at the base in pulling additional ropes and rescue equipment to the top. Chavez was contacted and further secured. One DCSOSAR volunteer was then lowered to Coleman’s location. Utilizing two ropes, Coleman was then transferred onto the rescue ropes and the two were then lowered the rest of the way down the rock, reaching the bottom at about midnight. Chavez was then assisted in rappelling off of the proper side of Monkey Face.

Coleman and Chavez were not injured and did not require further medical assistance. The Deschutes County Sheriff’s Office would like to remind those recreating, whether it be at Smith Rock State Park or in the backcountry, to research and pre-plan your chosen location to minimize risk.